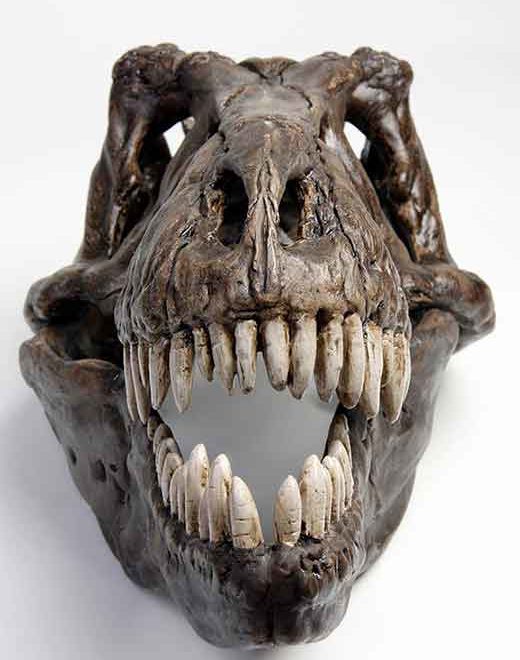 Paleontologists have learned many things about dinosaurs by studying the fossilized remains of their bones and teeth. By studying the teeth of dinosaurs, scientists can find important clues about what the different types of dinosaurs ate and how they got their food. Dinosaurs that ate meat needed teeth that were as sharp as knives. Dinosaurs that ate plants needed special teeth that would pull the leaves off of branches and grind them up. Some dinosaurs had overbites, much like human overbites. Each dinosaur tooth served a special purpose to help a dinosaur eat.

To learn about dinosaurs teeth, paleontologists look for and study fossils. Fossils are hardened minerals that take on the shape of bones that once existed. Over a very long period of time, the bones are buried and then dissolve, leaving behind empty spaces that are filled by minerals. Fossils are found buried in the ground, and they can hide virtually anywhere. Paleontologists often dig in stone quarries, in mountain areas, and in creek beds because it’s common to find fossils in these areas. While digging, they take away small amounts of dirt at a time so they don’t overlook or damage any fossils that could be hiding there. Limestone rocks often have plant fossils in them, so scientists often search for limestone, too.

A fossil has to be at least 10,000 years old to be considered a true fossil. Paleontologists have found fossils that are 3.5 billion or more years old! Body fossils are fossils of the remains of animals, such as bones, teeth, and shells. Trace fossils are fossils, but they aren’t the remains of animals. Trace fossils might come from plants, or they could be footprints left in the soil. When something leaves a footprint, that space often fills with other material. When this happens, a cast fossil forms.